Where in the world are we?

Where in the World are We? 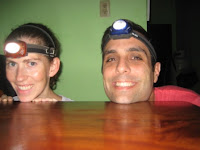 In the midst of Hurricane Richard, we are safe with our headlamps! (When the lights went out, we were bored and thought it would be funny to take pictures; that occupied us for 5 minutes...) 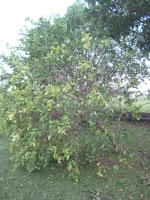 Our EAP (Emergency Action Plan) test in June kicked off a season of three additional real activations of the EAP, none of which resulted in a storm hitting Belize. The most recent one, TS Paula, only resulted in alerts to PCVs and nothing more. When reports of Tropical Storm Richard came to the staff email, we had to wonder, would yet another emergency be averted? or was this time going to be the real thing? The latter it was and here's our Hurricane Richard report from the eye of the storm.

On Thursday, we opened up the EOC (Emergency Operation Center) at 1pm and contacted the PCVs via their wardens (PCVs who serve as points of contact to other PCVs in their districts - Anthony was the warden in Belize City and recently assumed the role of warden for Belmopan when it became clear one warden for all of Cayo district was not enough) to alert them of the storm. Perhaps they wondered as did we whether this would result in anything more than a little rain.

On Friday, we remained on alert because Richard wasn't moving. His projected paths continued to move southward, though, making us wonder if it really would just stay away from Belize. We stayed on alert and discussed potential plans for the various PCV locations. By Saturday morning, Richard's slow speed and time spent brewing in the Caribbean just outside the Bay Islands of Honduras made him grow and predictions were for a category 1 hurricane to hit between Dangriga and Independence on Sunday evening. Anthony and I were the EOC crew with our SSC Daniel for Saturday morning so we put out the call to the various districts - we had all Belize City and Dangriga PCVs prepare to consolidate to Belmopan first thing Sunday morning (in hopes they would be on the buses before the other local evacuees and get seats) while our southern and northern village PCVs were already in their district towns and told to stay put. The folks out west (seemingly out of the line of the storm) were also told to stay where they were and all were told to keep off the roads.

Saturday night we listened closely to the radio (LOVE FM did an incredible job working nonstop to keep the country informed) and things seemed to stay on track with predicted paths. Mandatory evacuations were called by NEMO of particular areas in the south and we went to bed expecting the storm would come through the south Sunday evening with some rains from the outer bands hitting our area. 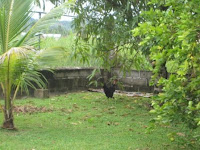 Rogue chicken running frantically around our yard; clearly it knows a storm's on the way!

On Sunday morning, we cranked up our radio (literally hand-cranked it! thanks goes out to Eric and Karen for this wind up radio that does not need batteries or electricity and even has quite a bright light) for the latest update. We missed the storm path info. by minutes, but the discussion clearly indicated that the storm was heading closer to Belize City by the comments related to sheltering and evacuations. Our phones were no longer working by this time (or at least were receiving messages at quite a delay from when they were sent) so we had not heard from PC (which we wondered about since Ant is a warden). We reached some coworkers after a few calls and were asked to come in for a meeting with the consolidated folks and bring the Belmopan PCVs in a half hour! That led to calls and texts - not many getting through since the phones were not working - and then a walk up to the hotel. It also led to a stop at the ATM since we realized we had not done all our hurricane prep expecting the storm not to hit... oh, and we filled up our laundry bucket for water storage in case it went out and we needed it to bathe and such. On the walk to the hotel, both our neighbors asked if we needed anything and we could sense the rising concern and fear in our Belizean friends, and were so thankful in their preparations and worry they still wanted to take care of us, too.

At the hotel, the projector was up with the current path of the storm - right across Belize City and then traveling along the western highway! The predictions ranged from category 1 to category 2 and the eye was expected over Belize City in the early evening; so that meant the storm rains and winds would hit much earlier - the storm was moving at 9 mph with 150 mile bands of wind and rain. We anticipated the power outage that would eventually come (luckily not until around 7:30pm, it was out for nearly 24 hours in our neighborhood and until Thursday in some other parts, so the recovery is the longer haul) and watched some episodes of Jamie Oliver's Food Revolution (aside: this is a great program, I hope his revolution changes the way we feed our children in schools at the very least and opens people's eyes to the crap that is in processed food) and periodically checked in with the radio reports to hear how the storm was impacting Belize City. There were many reports of rain and strong winds and trees downed. The power went out there far earlier than in Belmopan. Unfortunately, we also heard callers reporting people trapped in homes filling with water and other people trying to break in to gas stations or other empty buildings (so sad, and during the storm? really, people?). 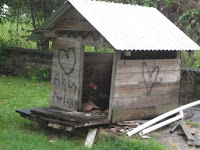 Smart chicken to find shelter from the storm (just not so smart to end up near my hungry neighbors...)

After making a delicious dinner of my healthy waffles and awesome vegan sausages, we returned to Jamie's quest and halfway through the power went. It had been flickering for hours, so we already had our headlamps ready. The rains and winds started to hit as well and we heard the full trash bucket go flying and the windows rattled while the trees blew sideways. It was intense, the winds are reported as 90mph, so that was some heavy stuff. Maya essentially slept through it all, only getting up to look out the window occassionally. We seriously have the most calm dog when it comes to storms, normal day-to-day she can be a bit loopy, but for some reason during storms she is calm as can be. We also had a visiting chicken who made its way into our yard in the afternoon and when it started raining before the major storm band, we discovered it sought shelter in the dog house in our backyard. Our neighbor saw it enter our yard and asked to make us dinner, we found it flitting around frantically until it discovered a safe haven. We checked on it periodically, but couldn't see it with our headlamps and through the wind and rain. Good news, my neighbor saw it leave the yard Monday morning, though I think she was disappointed because she said she saw her chicken leave... (update since original typing: the chicken returned while we were out, the neighbor's husband caught it, the chicken became soup (caldo); I was a bit sad for the chicken who'd managed to spare its life by hiding in the dog house only to become dinner the following day, but I understand such is the way of life for roaming chickens) 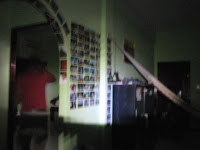 The expected loss of current; this was our view all storm long

Anyway, once the wind was at its peak, rain came under our front door and was leaking in through some cracks in our walls and by our windows and quickly pooled up. Anthony spent the rest of the storm mopping it out. Nothing worked to hold it out - two towels just soaked it up and then let it pass. We attempted to play cards, but Anthony's focus was on that water so I read my book and we just waited it out. The eye came over around 9pm, but there was still some rain, so we knew Maya would not take her nighttime pee break, but she just held it all night (she has some kind of crazy bladder!) and then had her walk with me as we assessed the neighborhood in the morning. Not too bad - a good amount of fallen trees, a few low hanging power lines and tons of puddles (but we get puddles every time it rains, so nothing new there). With the power still out, I used powdered milk with warm water for cereal, not the best, but it works and then took a freezing cold shower (I'm thankful the water is still on, so that was fine with me). When I came out, Anthony was checking out the backyard and called me to see it. I hadn't checked when I took Maya out; tree branches broke completely off the craboo tree and the lime tree is now looking like the Leaning Tower of Pisa and hanging on by a root-thread. I hope it makes it, but it's not looking great. The mango tree held up. There are pieces of a cardboard box from who knows where and coconuts. 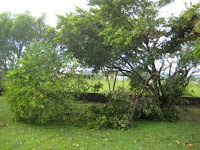 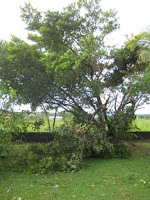 We are fortunate it was only a category 1 and wasn't traveling any slower. Houses have come down, roofs have blown off, and the power was down for a while, but there have been no reports of lives lost and that's a good thing. Though, a sad side is that since people survived the world won't even notice us and consider that the country needs help to recover. There isn't a magic pool of money that can cover the costs of repairing the damage and helping restore electricity and other infrastructure needs. It seems that's the way with aid money - people want to have hard numbers (how many lives saved, how many houses rebuilt) rather than consider that helping with basic needs may not be easily quanitifiable, but it is certainly more helpful in the long run of development; but that's another story for another day. 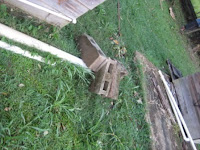 Another casualty of the storm was the drain pipe from the bathroom to the septic - eww; Anthony and the neighbor gave it a temporary fix holding it together with conrete blocks until the landlady's dad comes over to have a look 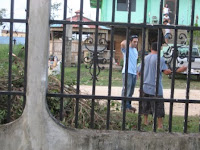 Tree debris pile gathered by Ant and our awesome neighbor who helped with his chain saw! Every home in our neighborhood had a large pile of tree debris out front for days.

"Not all Who Wander are Lost"
Hello! Welcome to our blog. We are RPCVs taking time to explore the world and enjoy the adventure of life. We'll post updates to the blog whenever we can and look forward to sharing the adventure with you! Hope you enjoy and we look forward to hearing from you. ~Ginnie and Anthony

Subscribe to receive email updates when new posts are added

Subscribe to "Not all Who Wander are Lost" by Email